I was planning a VBCW battle today but life got in the way. I did however give my quick play Samurai rules a run out. These are similar to the rules I normally play with much less complexity (I try and make them work like movie sequences). There are 4 levels of figures. Level one are peasants and bandits and roll a D4, level 2 are Ashigaru and roll a D6, level 3 are samurai and roll a D8 and sword saints are level 4 and roll a Q10.
The battle was 10 levels per side with the local peasantry (8 level 1 peasants and a level 2 leader - Ko) attacking the local feudal lord Mifume (level 3), his son Kenki (level 3) and 2 level 2 ashigaru. 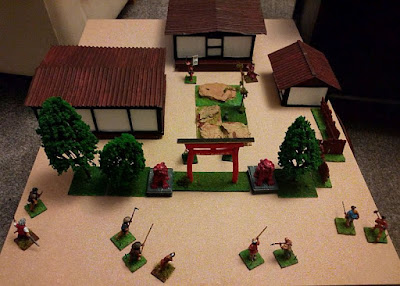 The battle opens with the peasants rushing the gate guarded by 2 ashigaru. 2 peasants reach but are killed. The ashigaru then advance and block the entrance and attack the next 2 peasants. 1 is killed but the other peasant kills one of the ashigaru. 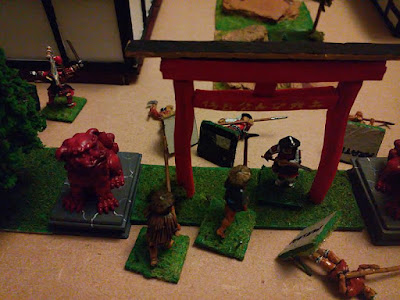 Meanwhile Kenji has advanced to attack the peasant and Ko that have swung round to the left killing the peasant. There followed an intense fight between Ko and Kenji with Ko landing numerous his and pushing Kenji back for 2 turns but Kenji's armour kept saving him. 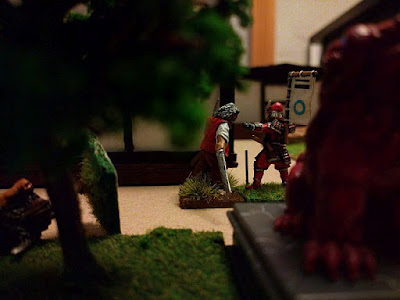 Finally kenji land a killing blow.
At the gate the last ashigaru kills the last peasant and on the right Mifune attacks the 2 peasants there and kills one per turn 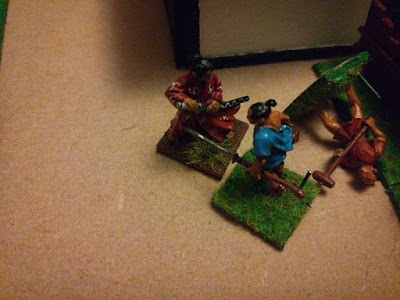 A good victory and the rules worked well with the armour and quality of the weapons being the major differences between the units. The peasants needed to gang up more on the higher level troops. A fun hour was had by all - well me anyway as it was a solo game.
This is a properly cool song.

Email ThisBlogThis!Share to TwitterShare to FacebookShare to Pinterest
Labels: Samurai