Calling him a muse is simply weird

So I posted monks with guns recently, an idea I stole from Clint. In the comments Evan of Canister and Grape fame suggested Bishops with Brens. Great idea so I made this guy tonight 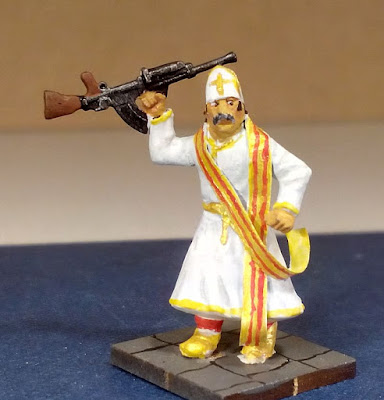 He is a gripping beast arab with a conical helmet cut and sanded to a mitre. The stole, the thing around his neck (I had to look that up) is a foil take away container. He looks Greek for some reason.
Does that make Evan my muse. We've never met but I can't imagine him in a diaphanous frock

This has been my earworm for about a week
Posted by MartinC at 20:26