Saturday I went over to the dungeon to fight another 7YW epic against Matt. In the battle of Hochkirch Frederick had been caught napping by the Austrians and was facing a desperate fight to escape 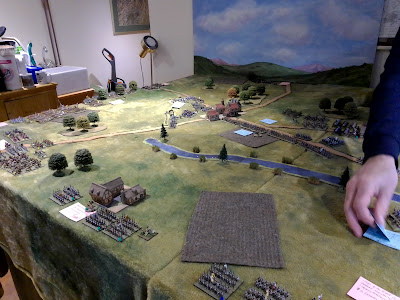 The setup, looking to the Southern end, with the prussians on the far side of the fordable river, and behind entrenchments around the base of the river tot he south of Hochkirch 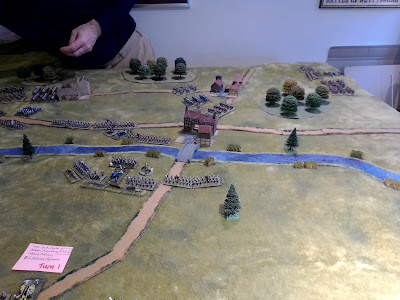 At the top of the river the crossing is held by a very strong force of grenadiers, again in entrenchments. 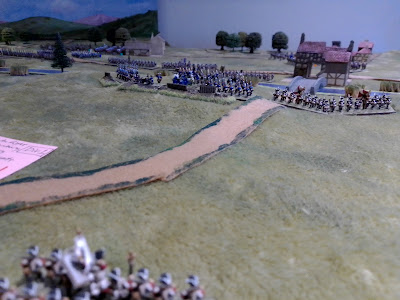 they will be a tough nut to crack 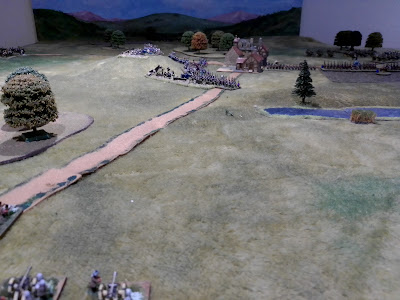 view of the southern entrenchments from the Austrian position. There are Austrians on may side of the river and to the south, where my main strength lies. my plan is to attach the bridge position to keep the Prussians busy whilst I attach from the south in overwhelming force. 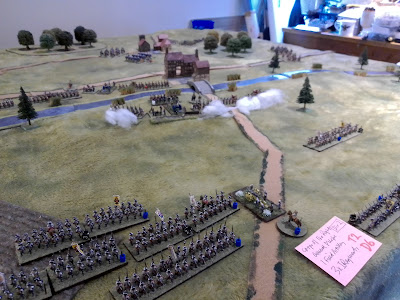 The battle opens with the Austrians emerging out of the fog in column and changing formation to line but they couldn't reach the bridge embankment in 1 turn The Prussians opened fire and butchered the brigade. It was combat ineffective inthe 1st turn and i did the maths in my head, there was no way i could take this redoubt. I'm contemplating a new hobby as Matt has 3 of these and shooting is ineffective against them. I need to charge in, but not here. 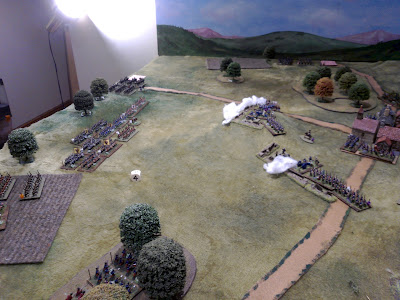 To the south I have 3 massive brigades and a cavalry brigade, with reinforcements expected. A well coordinated attack here and the Prussians will be running. I send the cavalry around the flank and begin my advance 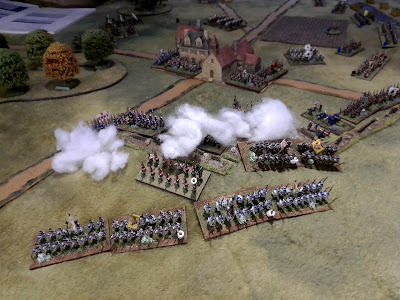 The 1st brigade smashed home but I roll terribly on command rolls and they go in unsupported. I spike the guns but the brigade routs. I'm now actively thinking of the best way to set fire to Matt's dungeon. 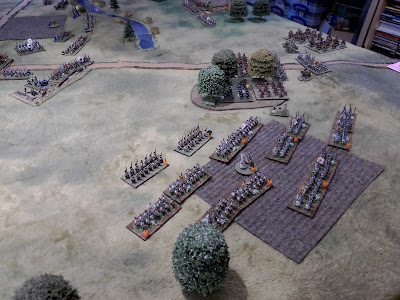 These 2 brigades watch their comrades run. 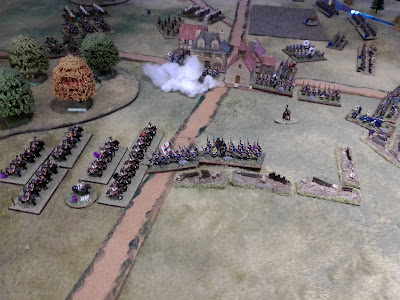 Next turn and my cavalry launches their flank attack on the southern redoubt and capture the trenches. Top work, although they won't be able to take the town 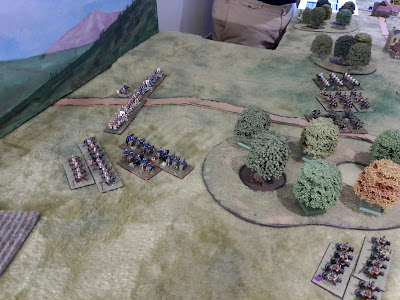 A brigade  of cavalry and infantry advances to the west and facing off against a Prussian cavalry brigade. 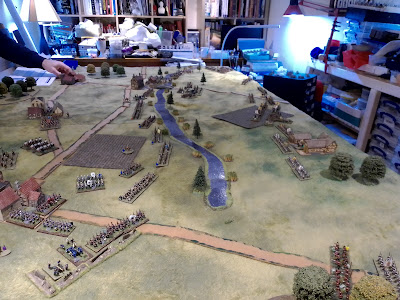 The view to the north. Prussians to the West of the river and Austrians to the East, currently out of range 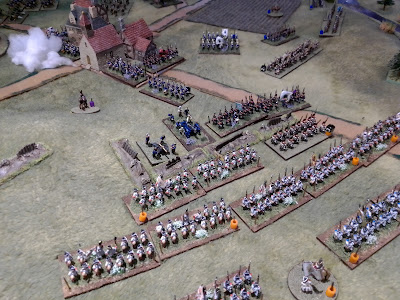 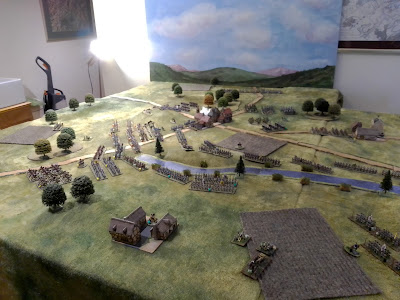 The massed Austrian infantry advance past the entrenchments and the end of the river and occupy Hochkirch. All I have to do now is sweep up the table and can claim the 7 victory points needed (1 per brigade destroyed and 1 for each village captured). I now have 3 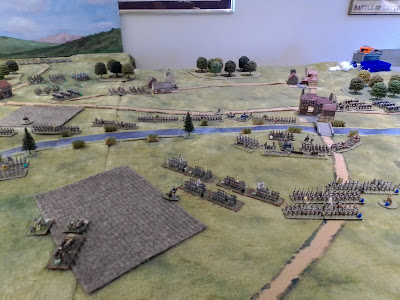 My bridge brigade is reinforced with another brigade and I try again for the redoubts. 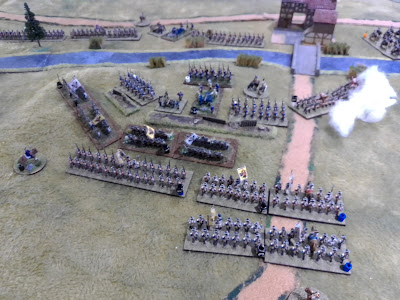 It is a complete disaster, again. In hindsight I should have left it alone and advanced my brigade to the North and support by recently arrived cavalry. I could have pinned a large force of Prussians and bypassed the redoubt. That's why it's called hindsight 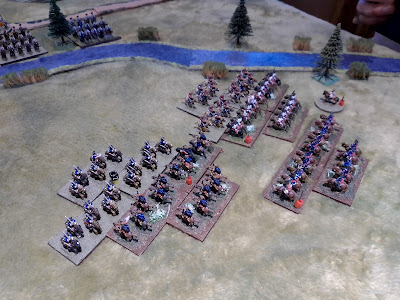 Because Matt's cavalry can now cross the river and engage my cavalry. I push him back but I'm very isolated here. 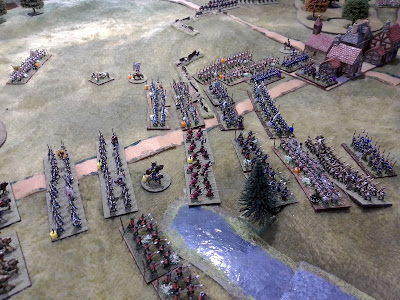 To the South my infantry advances 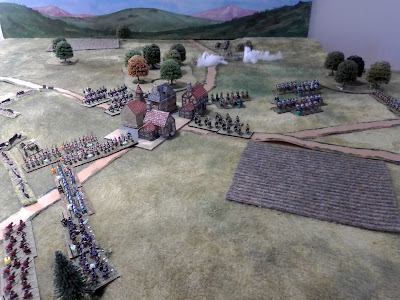 And clears out the Prussians, 4 VPs 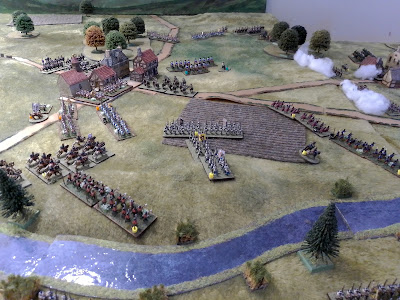 I'm in open country as Matt tries to organise a defence 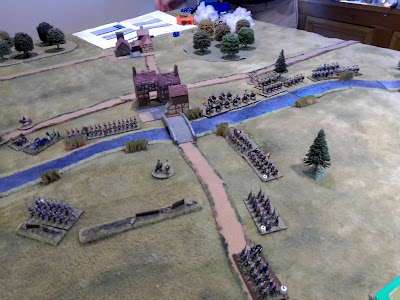 I've finaly cleared the redoubts around the bridge, but only becasue Matt has advanced to kill my cavalry! 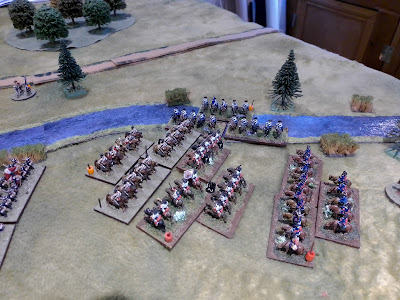 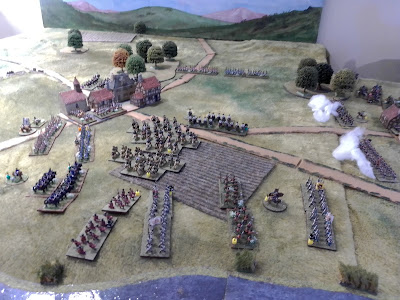 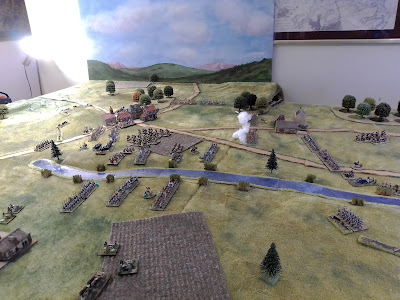 I see them off and am now at 5VPs 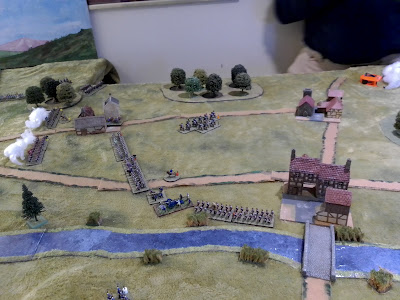 But Matt has a strong position with his 21/2 remaining brigades and we call it a day, it was 5.30.
It was another brilliant battle, with epic sweeping manoeuvres and the swing from loss to near victory made it very exciting. Love these battles more than any other.
On the 26th Pendraken are having their shop opening and i'm putting on a 7YW game, if you are in the NE come along, say hello and do some shopping