Last week I ran a 7 Years War online battle. Matt was playing the Prussians and Steve the Austrians. they both sent me orders in 3 turn blocks based on very limited information and I played the battle and sent them back limited feedback from the various brigades. I really enjoyed it.

Matt was protecting convoy and would recieve significant reinforcements after turn 3. Steve laid the ambush and would recieve significant reinforcements from turn 6. The real battle took place in Moravia in 1758 and the Austrians routed the enemy, captured the convoy of 4000 wagons and 2500 cattle. they caprured so much stuff that they had to burn the stuff they couldn't carry away. The loss of the convoy meant that the Prussians had to retreat from Moravia and probably saved Austria. How did Steve do? 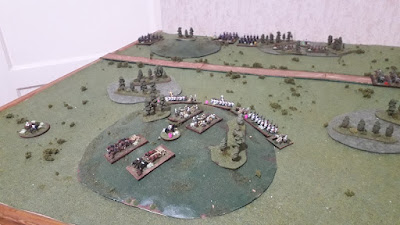 The Austrian Ambush with artillery and infantry on the hill and Grenzers in the woods opposite. There are cavalry behind the far hill 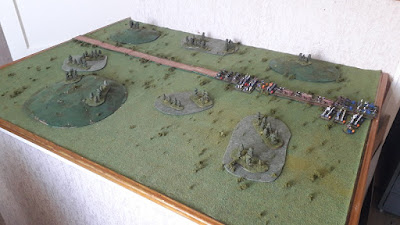 The Prussian convoy, didn't all quit fit onthe table at the start. Strong vanguard of hussars and infantry by crappy convoy guard units behind 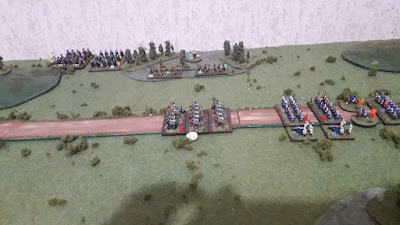 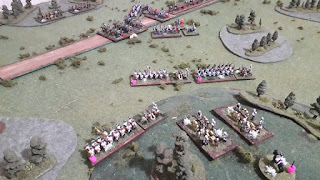 The convoy halts and the vanguard fans out. The Prussians are very badly outnumbered and the Austrians need to attack and run them over. However a fire fight ensues with the Austrians only tentatively advancing. This could be a mistake 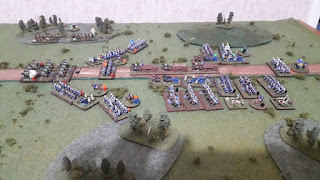 Turn 4 and the Prussian reinforcements arrive on mass very quickly. The Prussians now outnumber the Austrians. The convoy could be safe. 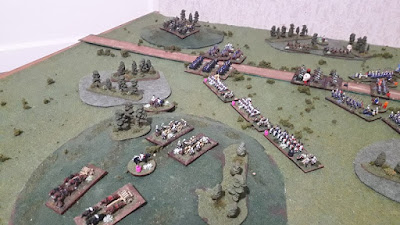 The Austrians dvance to engage the vanguard, the Hussars still exist but not for long 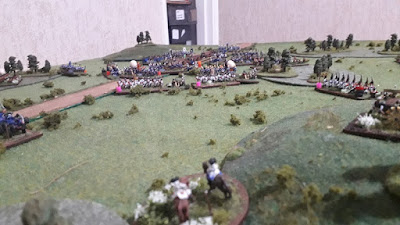 This it the only image Steve got of the battle, from the head of his commander 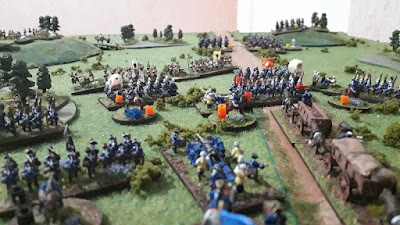 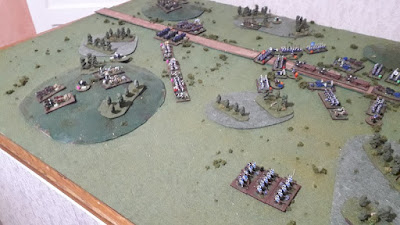 The traffic jam around the convoy needs some space and a 2nd Prussian Hussar regiment moves tothe East and suddenly has a clear run at the Austrian artillery. If they can strike home, it's at least 2 moves, then it will all be over 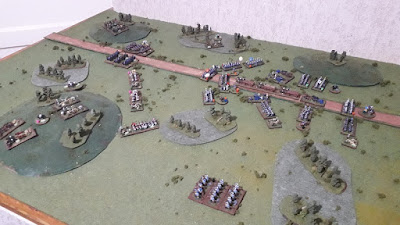 The Austrians see this and move a grenadier regiment to cover 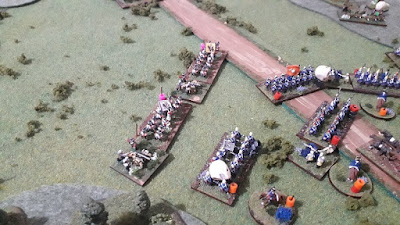 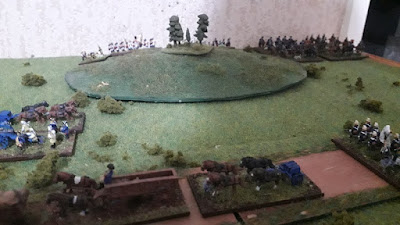 Disaster. The Austrian reinforcements appear to the rear and the unprotected convoy, all the Prussians are to the front. The forces are now about equal 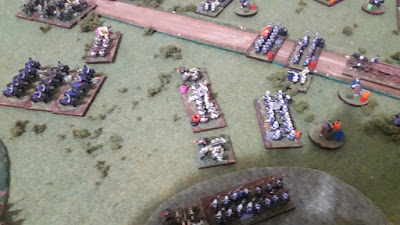 THe Prussians have managed to flank the advancing Austrians at the front and the Austrian infantry fail to strike home. the Austrian attack was impacted by the Hussars to the east 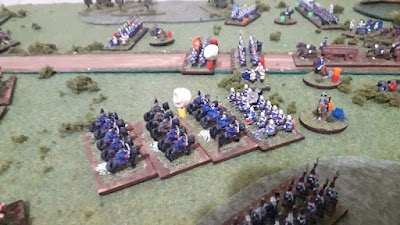 Austrian Horse Grenadiers charge at the front and rout the Prussian infantry and the way to the convoy is clear, but the Austrian cavalry are disordered and can't launch a sweeping attack.
THe same happens at the rear and the weight of Prussian fire releives the pressue 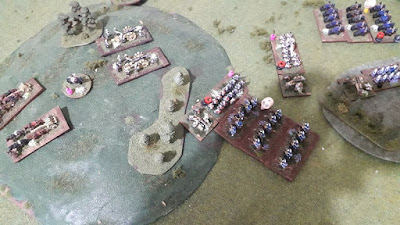 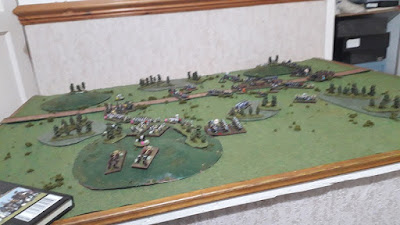 At that point I call the game. th Prussians haven't made it off the board but the Austrians are shattered. They only have 8 units left and 4 of those are shaken.
The game played really well, it is very hard to give the right amount of information back to the commanders. It was played with my 10mm 7YW collection and Black Powder rules. I used cm not inches for the distances and that worked perfectly. Some of the regiments had battalion guns and in Black Powder these are massively overpowered (at close range a battalion gun has the same power as the whole battalion so I simply added 1 dice to the firepower and that worked).
Overall the battle was defined by 2 things
1. THe Austrians opened fire too early this kept the convoy out of reach and allowed the reinforcements to catch up quickly
2. The Prussian Hussar regiment that moved to the East totally threw the Austrians and was a lucky move, wasn't planned as an attack but simply to move them out of the way
Right back to the challenge and my annual quest to come 2nd.

Email ThisBlogThis!Share to TwitterShare to FacebookShare to Pinterest
Labels: 7YW