I've completed my &YW armies. I know everybody says that and then buys shed loads more but look at what i've got and then say I need more.

This all started with a 10mm display game at Battlegrouhd show in 2018. Stafoord Wargamers had recreated Blenheim in 10mm and it looked fab. Matt decided to start a 10mm 7YW collection of Prussians and Austrians. Always up for something new I decided to join him. I initially started with Brunswickers but realised that they fought in the West against the French and not in the East against the Austrians - nowt like a good bit of research. Luckily the Brunsickers were generally dressed like Prussians so were an easy change to Prussians.

Once I'd moved to the Eastern front I decided to build the armies from the 1st major lind battle of the war, the Battle of Lobositz. Nominally a Prussian victory as the Austrians retired but in reality the Austrians built a roadblock to stop Frederick and when they had done that, and given him a bloody nose, they retired.

It's a pretty big battle with 28,500 Prussians vs 35,000 Austrians. The Kronoscaf website is a fantastic resource. So I bought the figures from Pendraken, there are some Old Glory infantry (don't like them), and artillery (they are great and they are cheap and you don't need to buy the limber like the Pendraken ones). The Pendraken stuff is amazing, massive fan.

Today I finished the last units

Both armies. Prussians on the right, Austrians on the left. An infantry regiment is 30 figures on 2 battalion sized bases (30mmx60mm). Ratio is about 50:1. Each regiment has a separate battalion gun. A cavaly regiment is 6 squadrons on 3 30x60mm bases (the area occupied is the same as an infantry battalion. 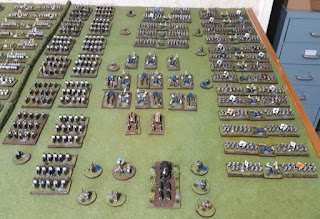 Prussians. The Prussian army is slightly larger than the one at Lobositz to make the forces more balanced for future games 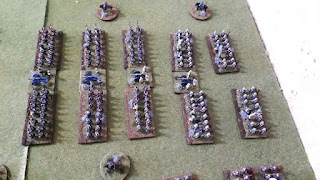 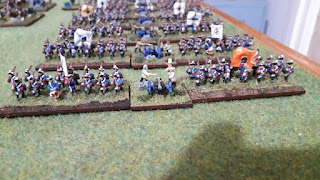 Infantry close up. All the Prussians have blue flowers on base (obviously as these were the last painted unit - von Winterfeldt - I forgot the flowers). 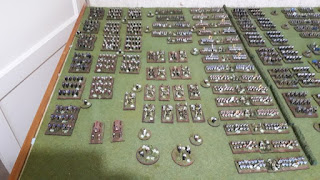 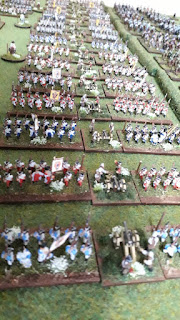 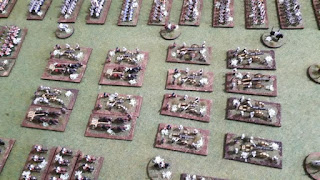 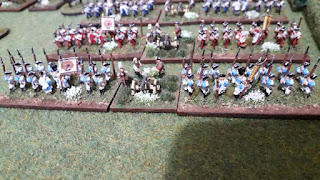 Close up of the infantry with white flowers
So that is the end of a project. I've repurposed some 6mm buildings for terrain (10mm buildings look at little too big and it's not an army that is going to fight in buildings).
A project completed. Now rest. Actually now work out some rules, Black powder takes too long, not tried General d' Armee, but have a plan or rules that will enable me to control a whole army quickly and not get bogged down in counters and factors.
Right time for the next project - I've got about 1500 x10mm Italian wars figures. Landsknechts in 10mm, deep joy - will need more yellow and red paint.