It's been while since I posted. The IX Analogue Hobbies Challenge has now ended and I generally don't like to post stuff twice so posting has been reduced. Overall I came 3rd in the challenge with just under 4500 points, my highest points tally ever, and top amongst the participants with a full time job - bloody retirees and the semi retired.That being said the quality of my work wasn't the best, just wasn't feeling the artist mojo so got my mass production head on. I painted the equivalent of 900 x 28mm infantry although the majority were 15mm so loads of figures. I painted an entire Classical Indian Army, obviously I've since bought a few more to act as generals. i also painted a WW2 commando company as a tribute to my Grandad who was a Commando in WW2.
Overall I'm 3rd in the total painting list, averaging over 3600 per challenge for my 5 challenges and only 39 points behind Dave who has done 8 challenges
I also finished my ACW collection and then unfinished it. I have a new goal which is to have 2 full divisions, 1 per side. I've picked Early's division and Birney's division - 1st Division III Corps as they were at Gettysburg. There s a little tweak as I have an extra Union Zouave regiment but that's a minor and colourful tweak.
I'm putting on a full ACW battle at the end of April and therefore need to finish the missing units so here is the 1st lot

Couple of Union Limbers. These a basically scratch built with the horses being some terrible ones I had from Irregular miniatures. I had to add harnesses out of milliput. The limbers are either from the Victrix British Napoleonic artillery box or made with some metal wheels I had. The outriders I made from a mix of Nap British Hussar legs, cast bodies and heads and arms from the bits box. They look OK, not great, but seeing as they will only get brief time on some battle fields they will do 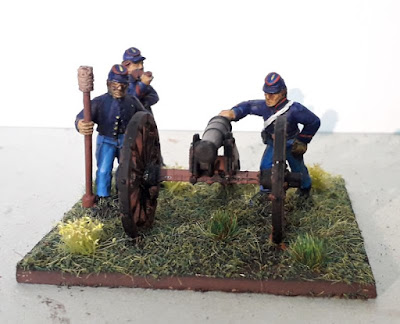 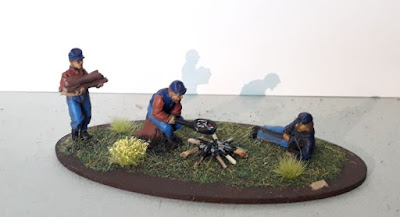 Union camp fire. This will make a useful objective in the upcoming battle 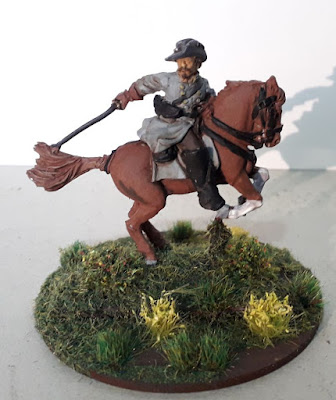 Finally at Hammerhead I bought a couple of vehicles from Urban Construct. They are not great quality but one of them had lots of potential. It is an armoured tractor for VBCW. I armed it wil at Boyes ATR to make it the equivalent of a deadly "tank hunter" 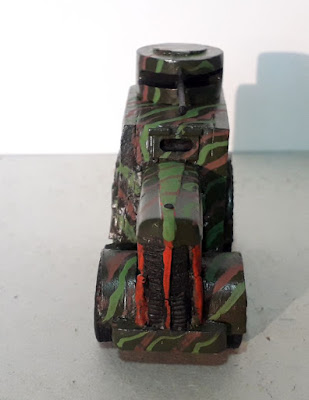 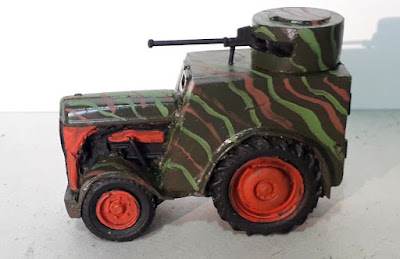 The paint job is bloody terrible and hasn't worked at all. Will paint it again. It was a undercoat issue - used shiny green paint and it just hasn't worked.