The Battle of Getme Drift

So in the spirit of trying out new things on my blog I thought I'd do an after action report on a solo colonial game I fought today using my own rules.
I enjoy solo wargaming, I can spend a week on a single game / problem and all disputes are solved amicably in my favour. The trick is to get the mechanics right and to pick the right sort of battle, meeting encounters and ambushes work best. I have a 3'x4' fixed space in my painting room which enables me to set up skirmish games for a long time.
It's 1896 in the German colony of Kamerun, West Africa, Getme Drift is a farmstead and church on the fringes of the jungle run by Reverend Jakob Schmelling, his wife Marta and their 2 sons Johan and Curt (that name seems to get around). They have 2 farm workers, Matthew and Mark. Due to their remoteness the colonial administration regularly sends patrols through the region. 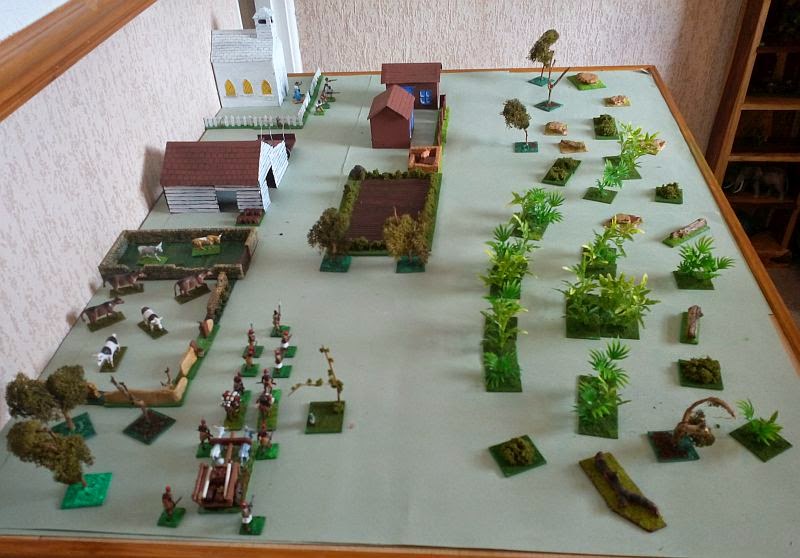 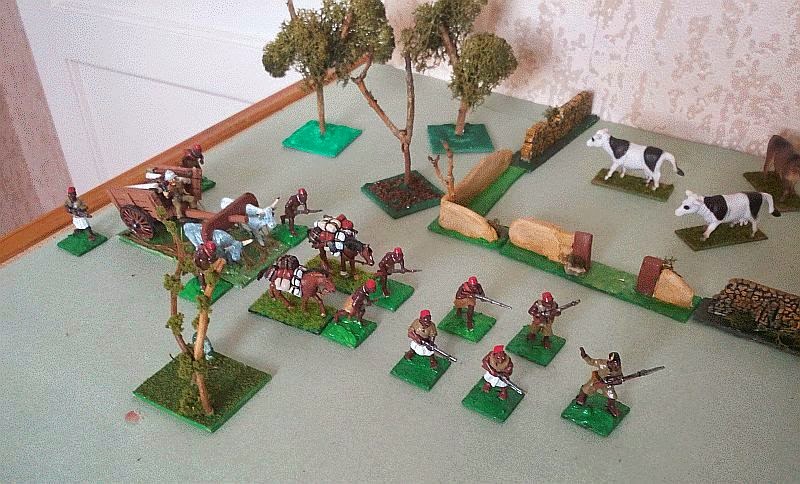 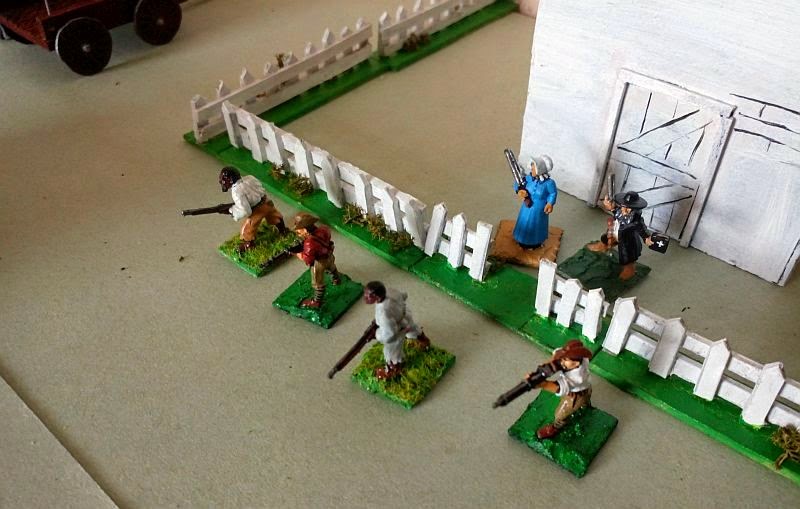 As the next patrol, under Sergeant Christian Alder and Corporal Joshua N'Komo arrives at Getme Drift a force of 14 fierce natives and a leader appears out of the jungle intent on taking livestock, supplies and killing colonial invaders. The location, type and size of native force is generated at random and ends the set up phase 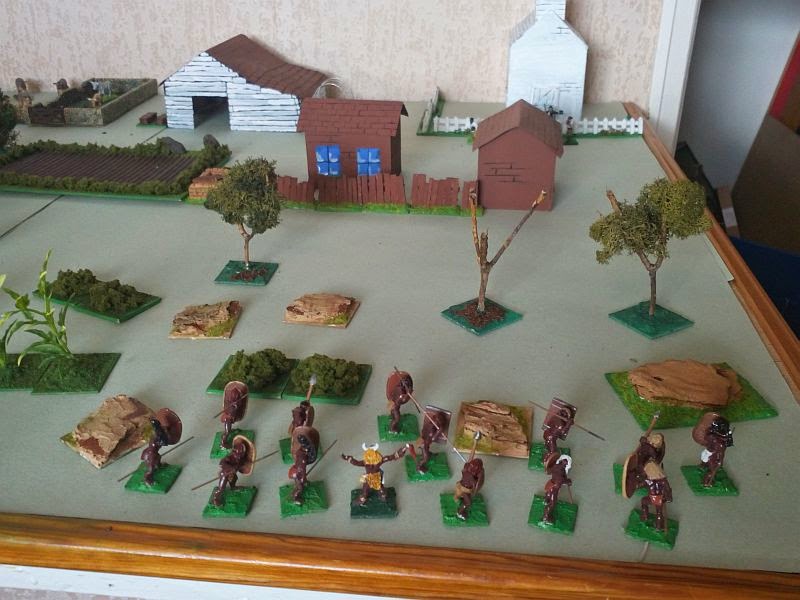 The 2nd turn  begins with an initiative roll, highest score goes first. Each unit then throws for activation before it can move. Units that fail have to stay still but can fire and shuffle their position without advancing or changing facing etc. The colonials went first and the Schmelling boys and Matthew advanced to the fence to delay the natives. The patrol advanced towards the barn where it would secure the cart and pack mules before engaging with the natives.The colonials ended their turn rolling for reinforcements, none came. The natives advanced through the terrain and a unit of 11 natives with a leader arrived behind the fierce natives to end the turn 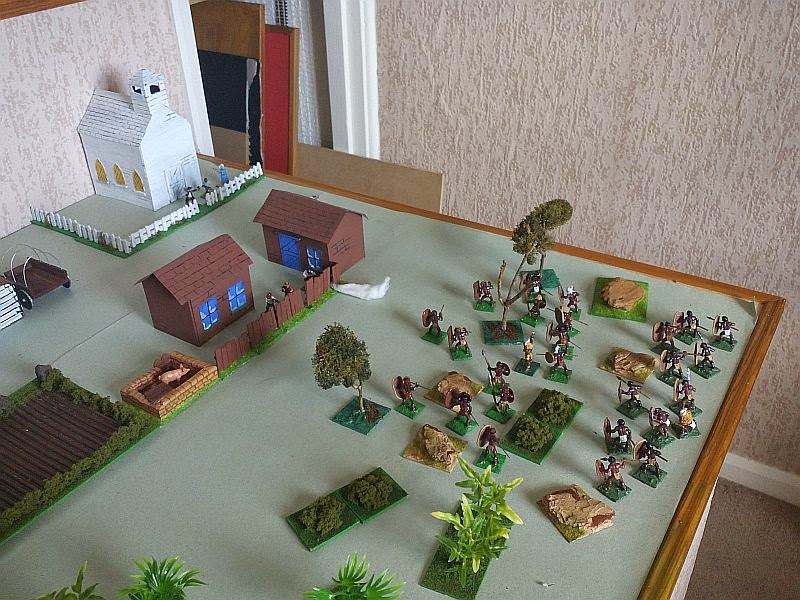 The colonials won initiative again and the Schmelling boys reached the fence and fired at the natives who weren't obscured by the terrain. Too rash and all missed. The patrol however failed its activation and stopped, the escorting askaris have an NCO so can split into 2 units and they passed the activation test but stayed with the cart. No reinforcements for the colonials though.
The next turn sees the natives with the initiative, however luck is with the Schmellings and the Fierce natives fail their activation test and stall. The natives behind pass and swing left behind the fierce natives. 8 bow armed natives arrive on the left of battle.
The Schmellings and the cart fail activation but the askaris under Cpl N'komo pass and run towards the ploughed field in the centre to support the Schmellings. Even though they failed activation the Schmelling boys and Matthew can fire at the advancing fierce warriors. 3 shots, 2 hits, 2 saves. No luck again, however saves are converted into pinning shots and added to the fierce warriors activation score. To activate they must roll against their leadership, -1 per pin. The colonial turn ends with the crew of the Valkyrie arriving as reinforcements. These are my favourite unit and are an all female unit under the command of Princess Cecile.

Crew of the Valkyrie

These are produced by Hinterland miniatures in the US (see sidebar) and are proper figures, dignified and ready for proper fighting, not some teenage post-Buffy fantasy (though I'm prone to them). They generally appear in my colonial and VBCW skirmishes and are very steady.
Colonials have initiative for next turn and Askari run into ploughed field and defend the hedge. Cart advances and Valkyrie crew from defensive line vs the bowmen. The Schmelling boys fire but miss. The fierce warriors activate and charge the fence and in the melee kill both the Johan and Curt Schmelling. Matthew knocks his attacker back but then legs it - as you would. 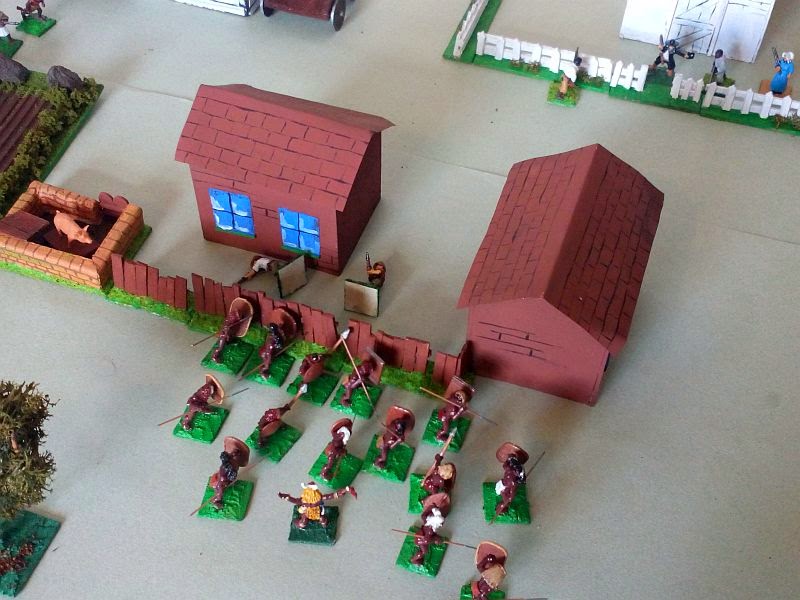 Death of Johan and Curt

Matthew fails his morale test and exits. The Schmellings run towards the askaris and safety. The Cart and pack horse reach the barn, the askaris and Sgt Alder debus and get ready to fight. The askari open fire and kill the 1st native. The female askari squad arrives under the command of Able Seawoman Hild Schumacher.

Only the fierce warriors pass activation and run along the fence toward the askari. Only one reaches to fight Cpl N'Komo who knocks his block off. Native reinforcements are starting to slow down, only 7 in last 2 turns. 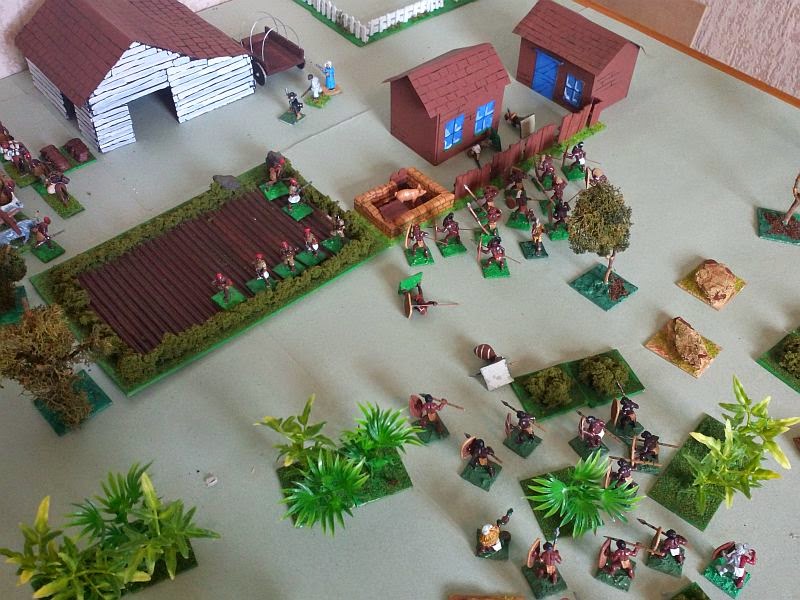 Turn 7 and the Schmellings and reserve askaris advance towards their fallen sons to recover the bodies. Valkyrie crew move to enfilade the attacking native, leaving the askari women to deal with the bowmen. The Askari in the field fire and take out 2 more natives.
The natives are activated and get in position to charge but the fierce natives are stalled again.
Turn 7 and the Valkyrie crew fire on the natives in the centre and kill 3 including the leader. The askari fire at same unit and kill one. The natives fail the rout test and exit map.
In a final desperate act the fierce warriors charge the askari and kill 2, including cpl N'komo whose actions almost certainly saved the day, and lose one man but the askari hold. The bowmen kill one of the askari women. but most importantly of all recieve no reinforcements. 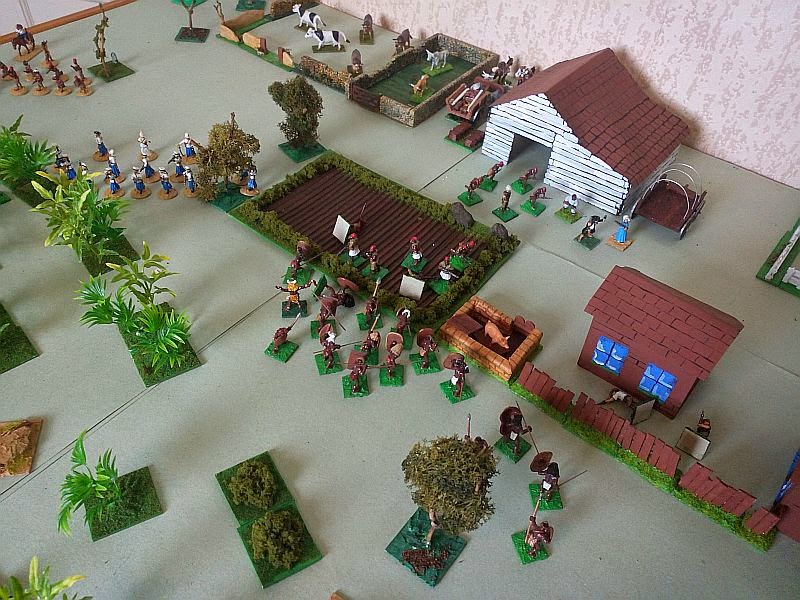 At the start of the next turn the natives get the initiative and decide to retreat, outnumbered and outgunned. A pyrrhic victory. The farm is safe but the Schmellings future is over, sorry Curt I wasn't expecting you to die. Jakob takes to drink and spends the rest of his life ranting at the world from street corners. Marta leaves with the crew of the Valkyrie and travels the world as one of the crew. Matthew and Mark return, make peace with the natives and turn the farm into a successful business trading ivory for beef.
Hope you enjoyed this. All the terrain was obviously scratch built and most of the figures were Wargames Foundry, really great but so expensive. I do like this type of battle, in this case the colonial reinforcements arrived too early and the natives didn't get enough men later on. Also it appears that unlke Star Trek if you want to live don't get a name.