The Austrian Army at the Battle of Lobositz

Dear all I hope you are keeping well and are in good health, I'm on 12 week lockdown (this day 5) due to underlying diabetes and am well. I work at Newcastle University and on Monday evening we began to close down and move online. It was an epic task made harder because we had to do it from home. We did it in 36 hours and proves that if the will is there then the amazing things can be done. So having spent 15 hours a day since typing and having online meetings I'm knackered. The schools are doing it now and I feel their pain, theirs is worse as they have to stay open and look after the children of key workers.
At the same time the Analogue Hobbies painting Challenge X has been drawing to a close and I painted the 2nd most amount of figures (AGAIN). It's been a good challenge and has got me through a tough winter. I'm not going to go through all the figures I painted, if you want you have enough clues to look for yourselves, but I painted the equivalent of 3700 10mm foot figures. I know it's a weird measure to use but I've painted a lot of 10mm this winter.  I did finsih a  Viking army I bought in1986. I've also mined out my lead mountain and only have a very few figures left to paint - some 15mm WW2 germans and some 28m samurai. The rest I've had for years and will have for years more.
I have helped James with his For Joshua project. Gamers from all around the world have contributed their time and treasure to paint and donate 10mm armies to James charity project. Please go and look.
And then there are my Austrians. About 15 onths ago Matt and I saw a game in 10mm at the Battleground show (think it was there). It looked brilliant and Matt started to collect and paint 10mm 7YW figures. Always being a butterfly I joined in and after a false start, I painted Brunswickers and they fought on the opposite front (a cautinary tale on a little knowledge), I decided to paint the whole Austrian Army for the 1st major battle of the war, Lobositz. Well yesterday morning between meetings I finished it

These were the last 2 units and formed part of the reserve. They are the Browne(front) and Alt-Colloredo regiments 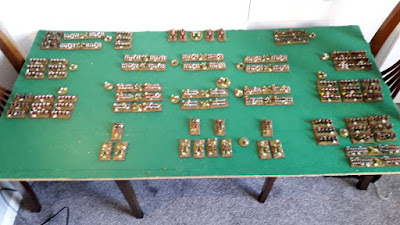 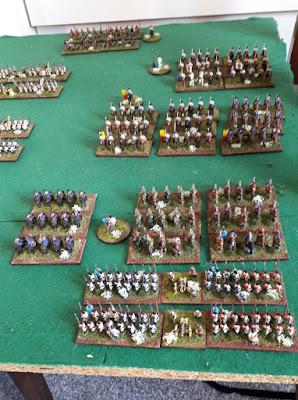 The left wing. Vanguard to the front (obviously), 1st line cavalry, 2nd line cavalry and the corps reserve of grenzers to the rear 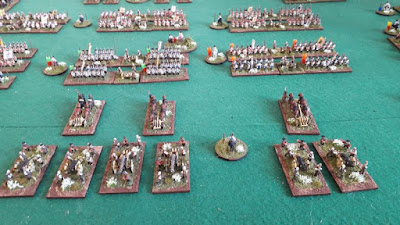 The centre and the artillery 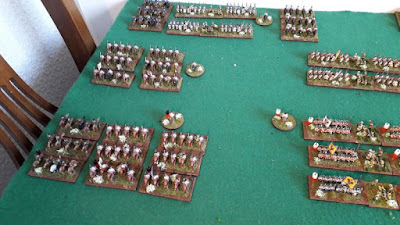 The right wing, 1st line cavalry, 2nd line cav and a reserve detachment stationed away from the main army.

Overall I'm pleased with them and plan to tinker with the Black powder rules. I have 4 regiments of Prussian infantry, 1 cav and loads of heavy artillery to paint and will make a start on these at some point during the lock down.
Speaking of which I've had a 15mm restock and plan to build the armies of the near east around about 80BC to fight my Pontic and Indian armies. They we tide me through the lockdown.
Keep safe one and all and I'll see you all once life starts to get back to normal.